What is wrong with Frankfurt? 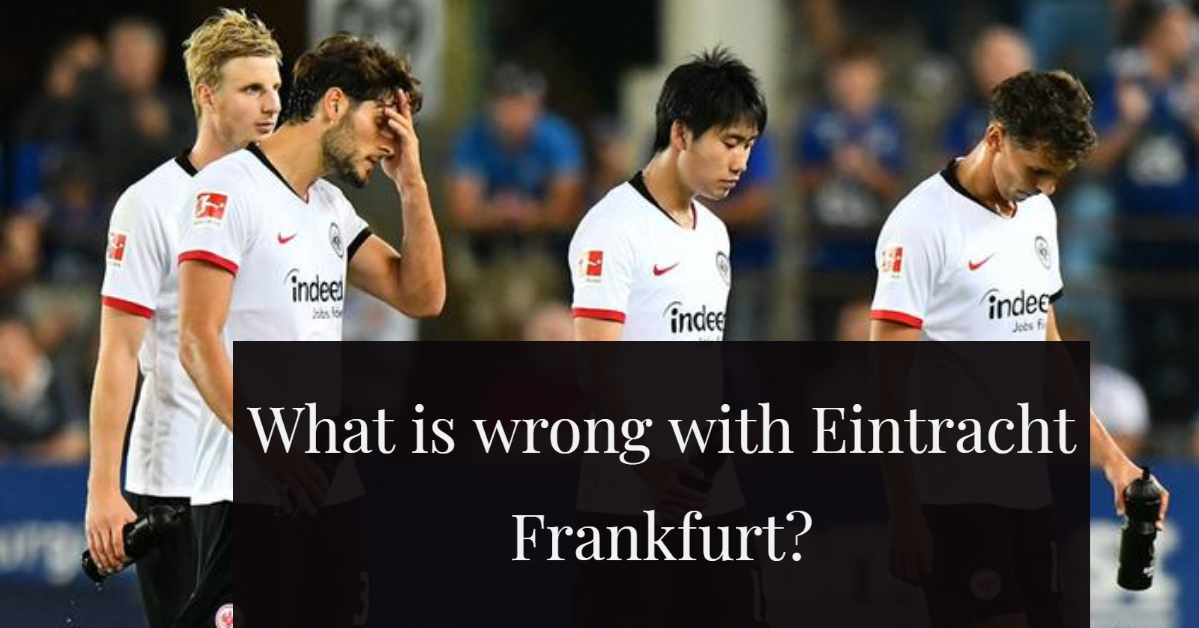 It's real now.  The fans.....the players.......the coach.....the media, they are all beginning to speak the words that no club ever wants to speak: Relegation battle.  A year ago, the Eintracht supporters were seeking a way to battle into a Champions League position, and now they are hoping to simply stay up.  This year Eintracht Frankfurt have moved on from the Moody Diva, and have completely lost their footing and their way.  After 6 straight Bundesliga games resulted in 1 points The Eagles now sit 14th in the Bundesliga standings, only 5 points clear of the Relegation playoff position.  Qualifying for European Competition next year now resides on only one hope; winning the DFB Pokal (German Cup).  A team that was looking to make a push into a steady and consistent European Qualifier is now just hoping to stay out of the relegation zone.

But why has this team fallen? A team that captured the hearts of so many in last year's Europa League run that ended with an impressive hard fought loss to Chelsea?  There are so many reasons why.  These cogs don't mesh, and the once well oiled machine is now sputtering to a halt. While it's easy to point out that last years team included a Buffalo Herd that was sold off to the highest bidder, S.G.E. has much deeper routed problems than that. While the visible signs of what this team should be were all over the field on Tuesday's matchup against S.C. Freiburg, the overwhelming evidence of what this team is was also right there, slapping everyone in the face.  There are three huge mechanical breakdowns for Eintracht Frankfurt, which is holding them near the bottom of the Bundesliga Table and keeping them from getting results.  They lie far beyond Adi Hütter's tactics, or player selection.  This team has enormous problems on the field in consistency, quality, and discipline.  While the talent is there to be a mid-table club and challenger for Europe, there are also glaring holes in quality at key positions.  Here is a quick look at the three biggest issues that current squad must directly address.

(1) Defensive Compactness and energy:  There are quite a few reasons why defensive compactness is such a huge problem this year for Frankfurt this year.  The defense has absolutely been gashed in the Ruckrunde (second half of the season).  Injuries (Marco Russ, David Abraham) have limited their depth, as well as Makoto Hasebe's age.  This lack of depth has led to newly acquired Stefan Ilsanker playing heavy minutes in the back, without hardly any time to train and get into the squad.  The results have been poor. With Ilsanker manning the back line, Eintracht have given up 18 goals over the last five appearances.  The fault is not his own, but he is playing poor in 1v1 defense, losing his mark, and not playing balls in the air particularly well.  On Freiburg's first goal from Tuesday, Ilsanker allowed Grifo to easily move past him to the gaping hole in the middle of Eintracht's defense, and place one between himself and Makoto Hasebe.  While the ball ended up being a knuckleball off the backside of Hasebe, Ilsanker never closed down or created the pressure needed to disturb Grifo. With Hasebe being held by 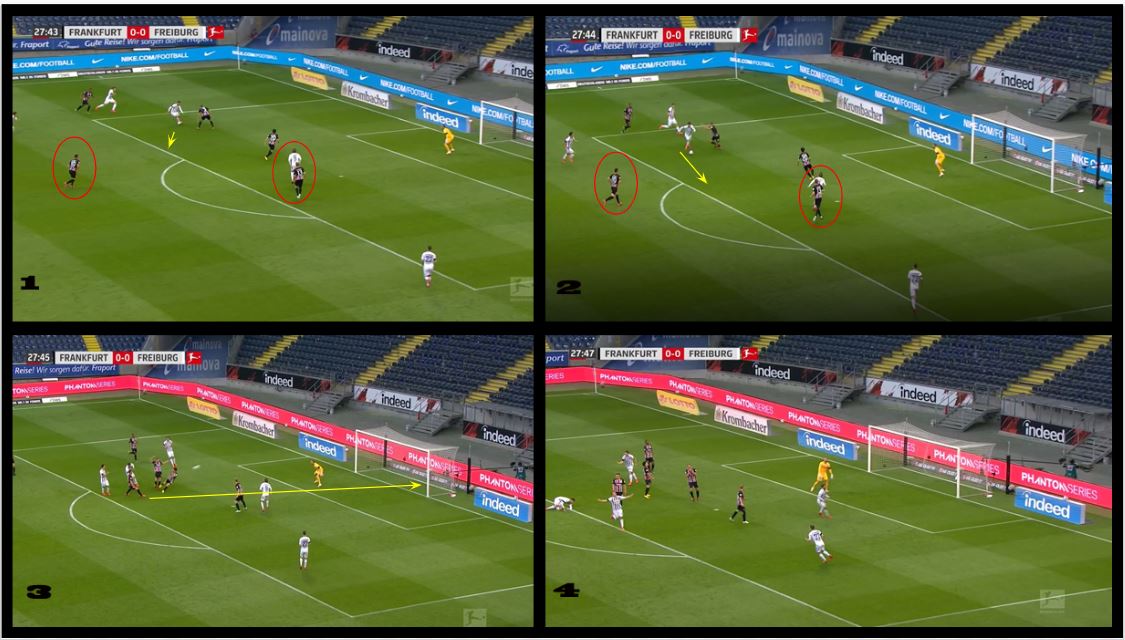 Freshly substituted on Dominik Kohr also failed to get back and into position to cut off the ball carrier.  Ilsanker also got flat out beat by Niels Peterson on the second.  Peterson got inside Ilsanker and outran him to the ball. Ilsanker is not the any culprit by any means. Desperate to make plays, Martin Hinteregger is pushing further and further up the field, leaving himself and his teammates exposed in the back.  Hinteregger has been constantly chasing and out of position.  This leaves gaps in the back line, and in the midfield defense. 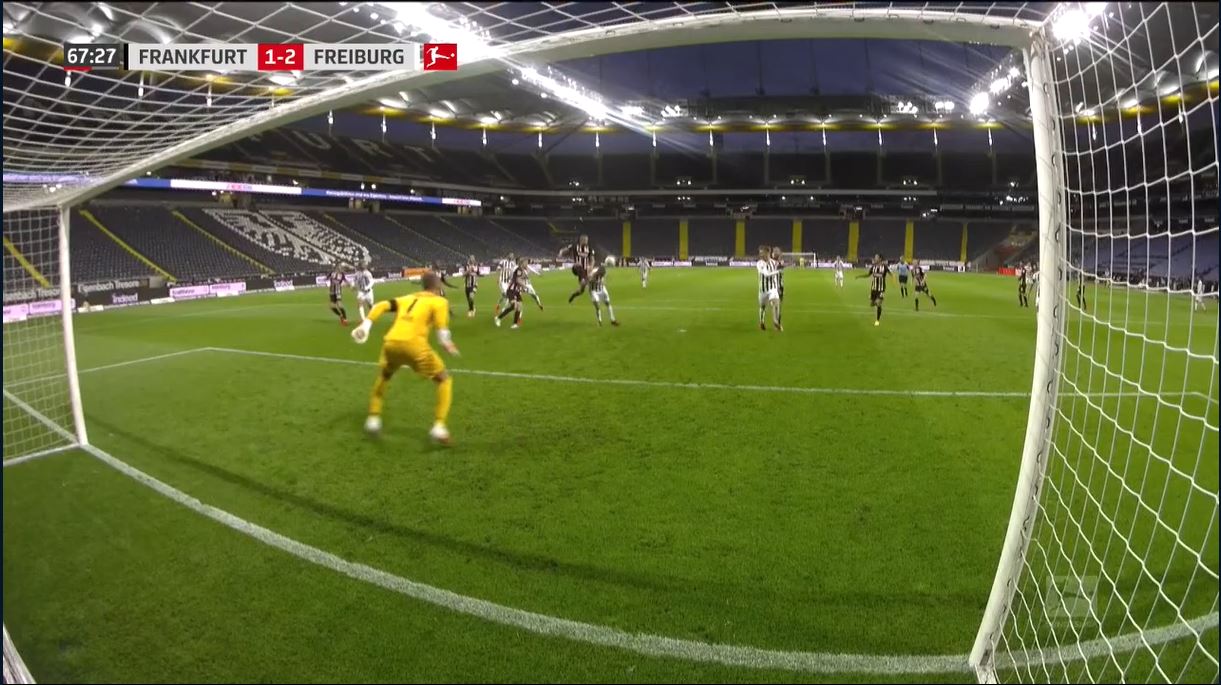 David Abraham and Evan N'Dicka have also been shaky and lackadaisical on ball since the return.  Abraham completely lost Alexandre Plea on Gladbach second goal on Matchday 26.   Eintracht has been soo poorly positioned, Bayern shredded them with timely runs and passing. The 4-1-4-1 Adi Hutter had used for several weeks was gashed time and time again as Eintracht could not stay compact, and was gashed to the tune of 5 goals. Bayern's first goal was a prime example of this.  All of it was set up by extremely wide lanes and poor marking.  As Jordy Alaba plays the ball forward to Ivan Perisic, there is soo much space both in front of, and behind Almamy Toure that Perisic simply decoys and plays the ball through.  Thomas Mueller ran into a gaping hole, virtually unchecked, and played the ball into the final third under almost no pressure.  Toure got no help, and had to race back to pick Mueller up, who then played a ball to the cavernous hole in the middle of the field, right in front of the net.  N'Dicka and Ilsanker did nothing to help pressure or play the ball, and while Leon Goretzka came flying in (also unchecked) to score the goal, two other Bayern attackers where also in position to do so. 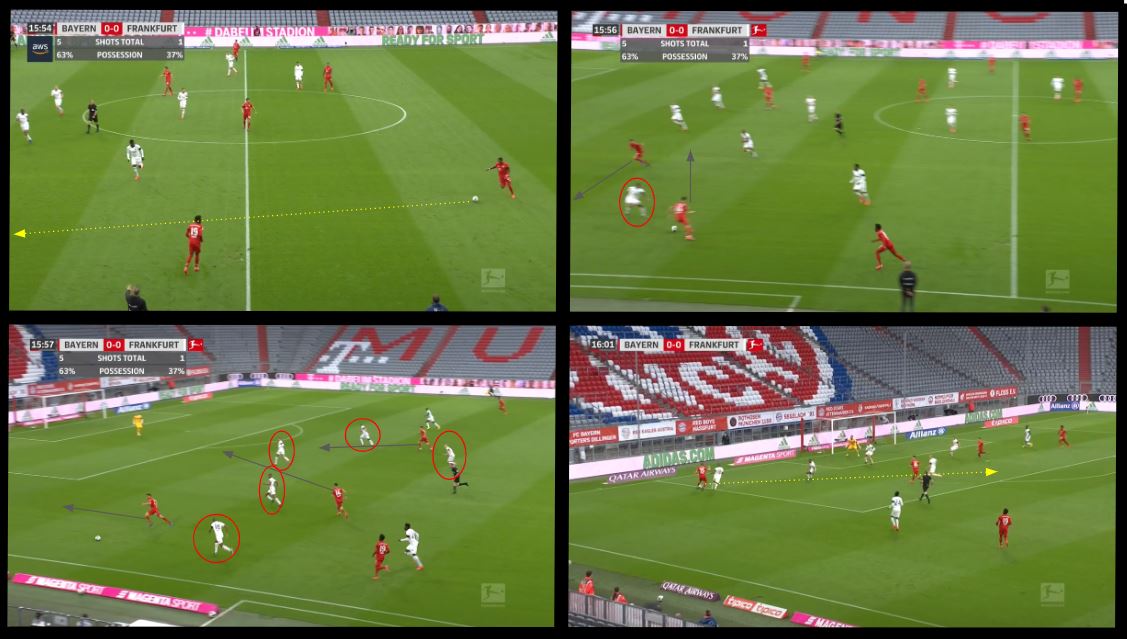 Gelson Fernandes, lacking the pace to get back into the play, was also indecisive and playing no-man's land.  Unfortunately, he was playing like he hadn't played in several months.  While Adi Hutter has tried to adjust tactics, the players on the pitch must give better effort and have better tactical awareness.  They must close down with a purpose.  The midfield, which is pushing up in order to try to create chances, must get back and cover.  The gaps in the midfield are constantly being exposed.  Not just on shots such as Goretzka's, but on passes that that constantly matriculate the ball down field.  Other than Sebastian Rode, who terrorized Freiburg in the attacking third, the midfield has offered almost no resistance vs opposing attacks.  Teams have advanced the ball almost at will against The Eagles in the back end of the season, and especially through the middle.  The forwards, which where an enormous part of Eintracht,s press a year ago, have offered nothing.  Hutter ditched the 3-4-1-2 in order to install a dropping, more solid, 4-4-1-1 which worked for a time, including back to back wins over Hoffenheim and RB Leipzig in January.  But as teams adjusted to it, gaps where exposed and almost no decent chances could be created. While Eintracht ranks first in the league in tackles won, first in the league in shots saved, and in the middle of the pack in most defensive categories, the goals they have conceded since January reflect the gaps that they are leaving in their defense. 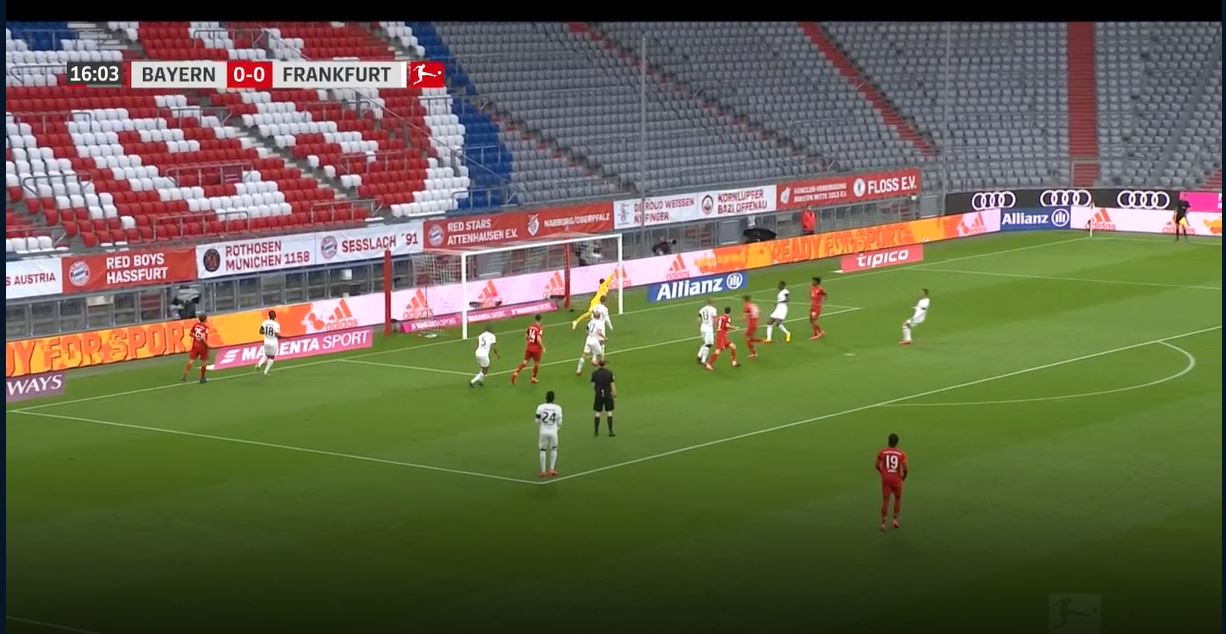 Goretzka finds open space, and the back of the net.

Eintracht ranks dead last in touches in the defensive penalty area.  They aren't consistently winning the ball back there, and when teams get the ball in that area, it typically means bad things for the White and Black.  Although Kevin Trapp has been fairly solid this year, the shots that he's facing make it impossible for him to keep the ball out of the net.

(2) Passing: Eintracht ranks 15th in the Bundesliga in passing percentage (74.4%). They rank 16th in short passing percentage (29.6%), 16th in medium passing percentage (83.0%) and 16th in deep passing percentage (63.4%).  They are tied for second most passes out of bounds (258) and tied for first in most passes blocked (427).  Eintracht ranks 16th in Receiving percentage (80.5%). Their best passer, Makoto Hasebe, has been used less and less as the season winds down and their second best passer, Lucas Torro, almost never plays.  Danny Da Costa has been abysmal in the short passing game (1/32), but has actually been near his marks from a year ago in every other passing category, and has almost all but lost his place in the squad rotation.  Eintracht simply cannot string passes together in any manner, much less a dangerous one.  During the Freiburg game, there was a glimpse of the highly creative, free wheeling offense that we saw from last year.  Bas Dost was winning the ball in the air, finding teammates on the run, and connecting play.  We also saw the mishaps which are plaguing the team this season.  Against Freiburg, Rode wins a ball just outside the penalty box creating a 2 v 1 with Dost.  Rode draws the defense, and fires a pass to Dost.  The pass is just behind Dost, who has to stop, take an extra touch, and fires a shot a foot wide of the goal post. It's a consistent, persistent year long problem, and something Hutter must address.

(3) Finishing: Tuesday vs. Freiburg, Eintracht created 34 shots, 16 of which where on target. That resulted in 3 goals. Eintracht ranks tied for third to last in Goals/Shots on Target (.28), behind Paderborn '07.  Daichi Kamada ranks last on the team, and 163 (last among all players who have scored a goal in the entire league) with .06 goals per shot on target.  Best displayed by the final minute of extra time against Freiburg, where Kamada received the ball inside the penalty box and directly in front of goal.  With the game on the line, Kamada left footed the ball 20 feet wide of the goal.  Only two Eintracht players rank in the top 70 of the Bundesliga in Goals per Shot on Target; Martin Hinteregger (41st - .47) and Timmy Chandler (9th - .63). The finishing has been a thorn in their side all season.  Against Freiburg, Kamada twice found himself 1 v 1 with the goal keeper, and twice hit him square in the chest.  Filip Kostic found himself all alone with the keeper late in the game, and found the keeper's knee.  Eintracht has to be more clinical in front of the net if they hope to turn this around.

Posted by Brian Gilchriest at 5:45 PM