What Lies ahead for Luka Jovic and Eintracht Frankfurt? 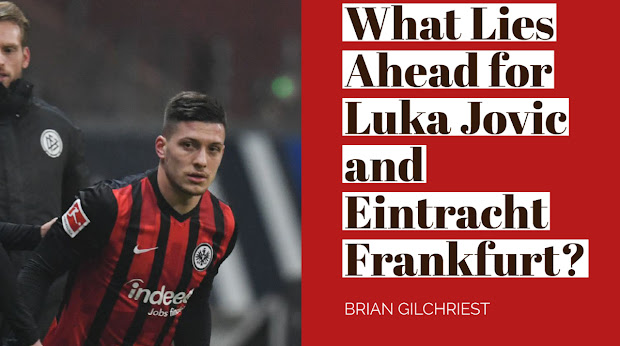 A strong run, a perfect spot, a lobbed cross, a right foot.   Just like that, Filip Kostic found Luka Jovic roughly 8 meters in front of the net.  Just like that, Luka Jovic found the back of the net to put the Eagles up 2-1 against Schalke.  It seemed old hat, like 18 months had never disappeared between the pairing playing meaningful minutes together as if they were picking right up where they had left off the previous week. With that moment, the revitalization of Luka Jovic began.  Adi Hutter is now tasked with the reanimation of a once promising striker's form, after once lifting it to heights no one expected.  When Luka Jovic last graced the pitch of Der Waldstadion (yes, I am aware of the official name), his 27 goals and 6 assists across all competitions earned him a shot at Real stardum (see what I did there?).   As both he and Sebastien Haller have found out, the football life can be a cruel, cruel world.

Luka fell into striker purgatory.  Earning nothing much more than spare time in a system that didn't fit his style of play, for a coach who didn't want to play him. The hope is that Luka and Hutter reform a mutualistic symbiotic relationship (two organisms who benefit each other).  Luka helped propel Eintracht to back to back European competitions.  Hutter helped propel a 20 year old striker to one of the most prolific in Europe.  So far, results are encouraging.  Jovic equaled his goal total from the previous 18 months at Real Madrid.....in 29 minutes of action.  Scoring after being subbed in, Jovic blew the doors open against Schalke and provided the finishing touch that had escaped the Eagles for the first 70 minutes of play.  The first (described above) came from a perfect cross that Jovic blew past keeper Ralf Fahrman without even letting it hit the ground.  Eintracht had repeatedly created lethal chances directly in front of the net, and with the exception of a fortuitous bounce off of Aymen Barkok's face that found Andre Silva in front of the net, Eintracht continually came up empty.  That has been a story for the Eagles this year.  Creating chances that go fruitless.

Why this deal, and why now?

Eintracht, at the time of the deal, was only sitting 2 points behind the Europa league spots, and 5 points clear of Champions League positions. After the 5-1 drubbing at the hands of Bayern Munchen on October 24th, Eintracht went 0-5-1 pulling only 5 points in the next 6 contests.  Since the gut wrenching 3-3 performance against Borussia Monchengladbach, Die Adler have pulled all three points on 5 out of 6 matches, and haven't lost a game since the 1-2 defeat to the hands of Wolfsburg.  And, as brilliant as Andre Silva has been this year, when you have a chance to pair him with a dynamic goal scorer such as Jovic, you do it. Although Jovic was a disappointment in Madrid and was labeled as a bust, the entire Bundesliga knows how effective a player he is in this system.

For all the opportunities he was given, Bas Dost was never what Eintracht needed.  He was a square peg in a round hole.  While Dost wasn't categorically horrible, he just never seemed.....you know.....good.  Granted he was trying to fill the shoes of Sebastien Haller, who's arial success was a huge driving force in Eintracht's Europa League run in 2018/2019.  Dost managed 12 Goals and 4 assists in 36 league games.  Dost was first in the Bundesliga in Arial Duels won at the time of his departure to Club Brugge, and still sits 4th despite missing the last 4 games.  Dost had trouble finding space, had even more troubles creating on his own, and was often missing his teammates with those headers won, which became increasingly closer to the defensive third than the attacking third.  He was, at times, serviceable.  He was never a dependable or dynamic player that Eintracht hoped he would be upon coming over from Sporting.  And while his productivity had definitely been in sharp decline in Portugal over the 3 previous years, the thought was he still had enough goal scoring and bounce to fill the role of (then) West Ham's newest acquisition.  They needed another threat.  Filip Kostic needs players that can finish off his runs.  He thrives in space created by Jovic or Silva. This year that space has been hard to find, as behind Jovic there has not been much threat.  Daichi Kamada has struggled mightily yet again just finding his footing, and although Amin Younes has played well, he's not a goal scoring threat in the box.

In 79 minutes total, Jovic has vaulted to third on the team in goals.  It will be safe to say he will pass Bas Dost's total of 4 in the the next couple of weeks.  But, while the promise of added scoring isn't the goal, the goal is playing in Europe next season.  Behind Bayern, the Bundesliga is wide open and without the added pressure or taxation on players legs Eintracht has a legitimate shot to finish in the top four this year with Jovic in tow.  Currently sitting 6th, and only 2 points clear of the top four, Eintracht could make a serious push for the Champions league.  The question is, if they can hold off Dortmund in their quest, all while passing Gladbach, Leverkusen, and Wolfsburg.  This is easier said than done.  Eintracht holds their own future in their hands currently, with the Ruckrunde matchups coming early in the second round of play.  Eintracht must also hold off teams like Union Berlin. Union is in a similar position as Eintracht, and are a scrappy squad. Despite recent losses at the hands of RB Leipzig, and a feisty Augsburg squad, Union Berlin will give you a battle every single match day.  Other questions remain at the other tenants of Berlin.  Hertha is perpetually a sleeping giant, and made several moves this summer in hopes to propel themselves into a European spot.  There is something at Hertha which just doesn't click, but maybe in the search for a new manager they find just the right conductor.  Eintracht has enormous opportunity this year, and the Jovic move was an aggressive act in order to seize their position.

Goals.  Lots and lots of goals.  Silva is currently sitting tied for second in the Bundesliga with 14 goals scored.  He's been excellent in front of the net this year, finding open space and finishing with clinical precision.  Silva is not a goal creator to the magnitude of Jovic.  He's very dependant on finding open spaces and teammates finding him.  Jovic can score in a multitude of is.  As seen by his second goal against Schalke, Jovic can just flat out beat defenders with one key pass.  The question to most of us isn't how the pairing of Jovic and Silva will eventually work, but who is playing behind them.  Younes has been playing really well, and has been a constant threat advancing the ball in the final third.  He's been making excellent decisions, and constantly exploring gaps in the opposing defenses.  While his statistical numbers (2 goals, 1 assist) don't necessarily reflect how well he's played, he's going to continue to get opportunities.  The Eintracht attack is simply better with him on the field.   His movement without the ball is just as important as his movement with it, and he's holding defenders in the middle of the field which opens up the flank for Filip Kostic to have more space to create.  The right flank is currently the teams biggest weakness.  Erik Durm has been solid, but not spectacular.   His defending is holding down an entire side of the pitch, and his crossing has been surprisingly accurate.  Durm always seems to be about 1/2 a second, or 1/2 an inch off, and has just missed Silva at the near post several times the last few weeks.  Almamy Toure has also been spectacularly average while holding down the right side, especially early in the season.  With Danny DaCosta now crossing the river to play for Mainz '05, Durm seems to have the inside track at the position.
Look for Hutter to deploy one of several options.  The 3-4-1-2 that he's run most frequently since he took over the reigns.  He's modified it slightly the past few weeks to a 3-4-2-1, with Silva playing up top as a lone striker and Younes and Barkok finding the space behind him.  The team has performed extremely efficiently both on the attack and holding shape defensively.  Hutter could also turn to a 4-4-2, utilizing Kostic and Timothy Chandler on the wings, and allowing Durm playing as a more traditional right back. He has toyed with this formation in the past, and this might be the perfect time to slowly incorporate it.  However, the 4-4-2 would limit the usefulness of Jibril Sow and Sebastian Rode.  Sow has began to really control the midfield, winning balls and zipping the ball back to the offensive end.  His emergence has been a big reason for Eintracht being unbeaten and pulling 18 out of a possible 21 points over the last seven.  I would look for Hutter to continue using the familiar 3-4-1-2 once Jovic gets on track. 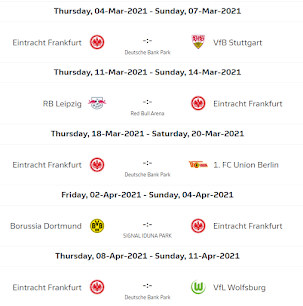 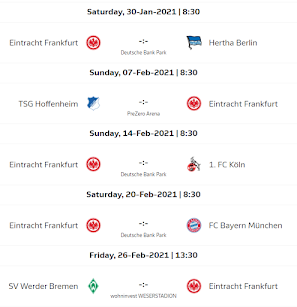 Eintracht's next ten match days are full of opportunity.  The next three against Hertha, Hoffenheim, and Koln provide plenty of opportunity to hold position at a minimum.  On paper, Eintracht is the better of all three squads, but all fans of the Launische Diva know better than to employ too much faith in the strength of our squad.  The last four matchups of this stage are pivotal.  Leipzig, Union Berlin, Dortmund and Wolfsburg are all teams fighting for those European spots.  Mix in the matchday 21 clash with Bayern Munich at Deutsche Bank Park, and the next ten should hold plenty of fireworks.  Eintracht will drop points in at least one of these matches.  Teams like Bremen or Stuttgart perpetually bring out the Diva in Frankfurt.  While there will undoubtedly be a gut wrenching loss in this span, and a stabbing late game draw or two, Eintracht could very well also win seven or eight of these matches and put Champions League squarely in their sights.  Let's all hope the Fussball Got is smiling on us, from his perch on the youth squad sideline.

Posted by Brian Gilchriest at 6:18 PM