No Silva? No Problem. 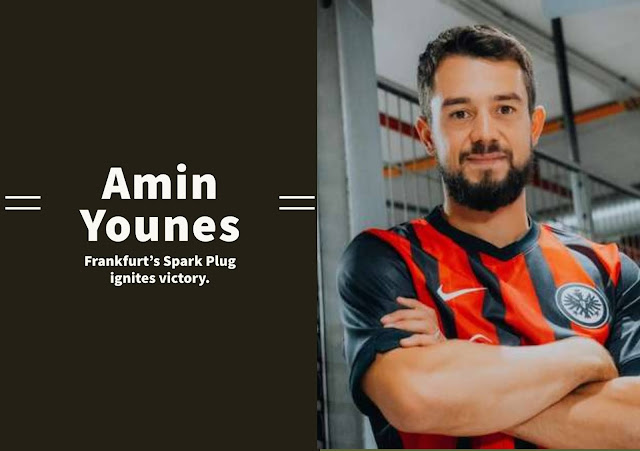 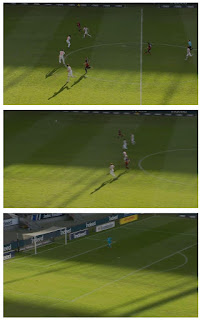 It wasn't an ordinary shot attempt.  It wasn't even a successful shot attempt.  When Amin Younes wound
up and fired one at Manuel Neuer from just beyond the midfield line, it was a statement: We Are Here To Win.  The shot landed about 12" off the mark, but had announced loud and clear to everyone watching that Eintracht Frankfurt were bringing the punches, not just sitting back and taking them.  After having a hand in the previous goal just moments before, and on his way to landing a knockout blow just a few moments later, the diminutive midfielder terrorized the Bavarians for the entirety of the first forty-five minutes of play.  With that supersonic  warning shot, Younes announced "Game On!" 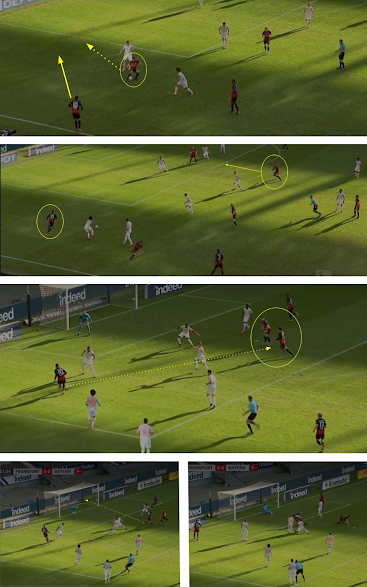 Whether it was the "#SayTheirNames" honoring of the victims of last year's tragedy in Hanau, or Eintracht's current run of form, Eintracht came into this game with immense focus and readiness.  S.G.E. attacked Bayerns defense from the opening kick.  They came out pressing high, determined to take advantage of Filip Kostic's matchup against Niklas Sule.  Makato Hasebe's high pressing led to Younes' first chance directly in front of goal just 3:14 into the game.  If not for a brilliant block by David Alaba, the game would have been 1-0.  After the untimely pause due to a Sideline Official's ankle injury, Eintracht went right back to work. Daichi Kamada finally game through with 11:35 in play.  Set up by Younes, who took a throw in from Filip Kostic, and stretched the Bayern defense with his ball handling, Younes the found Kostic with a nice through ball on the left flank, capitalized by a pinpoint cross that found not one but two open Eagles in front of the net.  Eintracht kept the pressure up, and despite having problems breaking through, they continued to create chances.  Almamy Toure created several chances, just missing twice.  Just after the thirty minute mark, Younes found the mark again.  Younes hit an unbelievable bender in the backside upper corner to put the score at 2-0, and while his celebration (acknowledging the name of Fatih Saraçoğlu ), but the shot was just as memorable.  Leaving Neuer with no chance, Younes put the insurance goal in just the right spot.  From there, it was time for Kevin Trapp to take over. 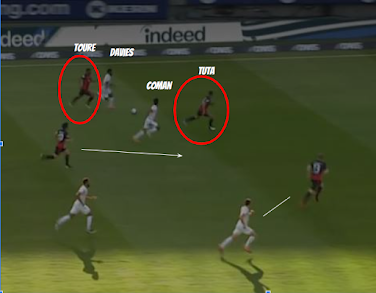 Trapp spent much of the first 30 minutes unscathed.  Eintracht's stifling defense was swarming the field in the early going.  Playing mostly a man marking with the back line, with Toure and Tuta matching Coman and Davies step for step.  Their marking allowed Rode and Hasebe to roam high up the field and attack both the passing lanes and chase down loose balls. Eintracht also bottled up Lewandowski, with Hinteregger slowing him down while help came from the flanks.  With the exception of one threatening run from Lewandowski, and a hapless shot that Leroy Sane punched through, Frankfurt's defense had snuffed up the Bayern attack.  The man marking, and the midfield's aggressive ball winning created large gaps in the midfield for Younes to play in to.  Immediately after Younes' goal, that begin to change.  Coman flipped in a brilliant cross, that would have been a goal if not for Trapps flying tip over the bar.  On the ensuing corner, Trapp set himself up perfectly to catch Sane's headed attempt.  When Sane found Eric Maxim Choupo-Moting in front of the net, the attempt went just wide. Trapp's double save at the thirty-nine minute mark kept Bayern off the scoreboard, and maintained the 2 goal lead going into the half. Eintracht would need every inch of that lead, because the second half would be a much different story.  Eintracht had spent the majority of the first half attacking Bayern, and Trapp and company had shut down Bayerns flanking attack. 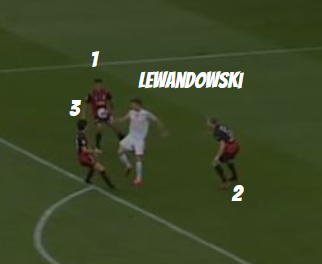 The first half stats where nearly identical except the for the score.  The second half, however, would be a much different story.  They dominated possession, the shut down every passing lane.  They came out like a team determined to make up the two goal difference.  Bayern won every ball and attacked in a flurry that generated 14 shots, but only getting one on target.  The defense, spear headed by Martin Hinteregger was locked in and on point.  As Eintracht found no footing in attack, the defense set in.  Sebastien Rode and Hasebe controlled the midfield. N'Dicka, Tuta, and Hinteregger set in deep, and rarely lost Lewandowski.  Trapp was there when he needed to be.  And with the exception of a world class play by LeRoy Sane, who found Lewandowski in the sweet spot, they never gave ground.

The addition of Leon Goretzka at the half changed the dynamic of the game.  Goretzka matched Younes, and the balls that Rode and Hasebe had gobbled up in the first half began falling to Bayern.  While Bayern won the second half by a landslide, it wasn't enough to catch Die Adler and win the game.  Younes' brilliant play, and the ability to execute the defensive gameplan and maintain shape allowed SGE to hold on to their lead.  Trapp was also magnificent when he needed to be.  Trapp was in position to not only stop shots, but win balls inside the box. While Bayern where the most dangerous team in the second half, Eintracht never broke.  Eintracht now sits 4th on the Bundesliga table. Winners of five straight, and unbeaten since the Wolfsburg game on December 11th, Eintracht have earned their way to a champions league position.  While fans are weary that the Launische Diva will make what is an almost yearly appearance in the Ruckrunde.
The next five games are vital in Eintracht's quest for the Champions League.  While Adi Hutter has recently waxed poetic about a run at the Bundesliga title, the next five games are vital towards the run towards a top 4 finish.  With Leipzig, Dortmund, and Wolfsburg upcoming (two of which being away from Deutsche Bank Park), Eintracht can either drop out of or entrench themselves into the top four.  The beautiful thing about it is, their future is in their hands.

Posted by Brian Gilchriest at 5:29 PM