Eintracht look half-hearted as they enter the final stretch. 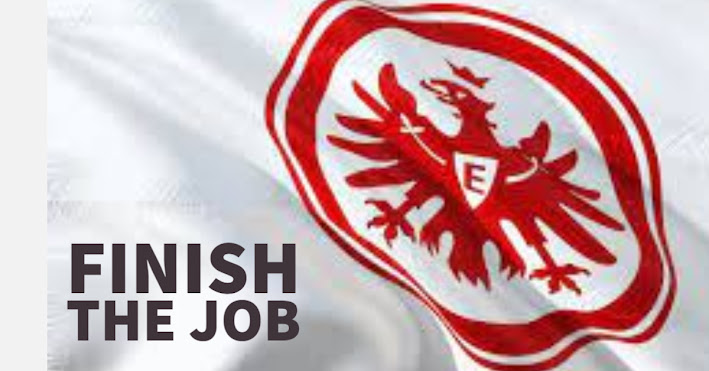 "Lame Ducks" is how the headline described them.  While it described the outgoing Coach, Sporting Director, and CEO, you have to wonder if it's matriculating to the men down on the pitch. Eintracht Frankfurt, who last week locked up European Qualification even in a 3:1 loss to Bayer Leverkusen, lacked the one thing that has made this season soo special: Fight. Leon Bailey exposed and exploited huge gaps in the Eintracht defense, and the fact that Eintracht only picked up 1 Yellow (N'Dicka, in the 87th minute) is highly uncharacteristic of this club.  All season long Eintracht has made opponents EARN every inch of the pitch.  If you blow by one, there is another line waiting for you.  If you have the audacity to beat the next line, you can expect a very unfriendly tactical foul on the other end of it.  To beat this defense has taken exceptional play, a little luck, and a lot of guts.  The last three games don't just show a different story, they look like they were written in a completely different book. 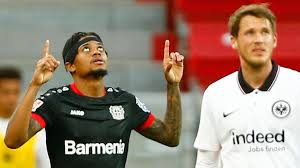 Even though it was 0:0 at the break, Kevin Trapp had his hands full.  His double save at the 4:00 mark showed not one, but two Leverkusen players find wide spaces inside the box with clear sights on the goal.  The pass found Schick far too easily, and no-one marked Bailey on the backside.  Time and time again over the first 45 minutes of play, you saw Leverkusen spring to open spaces while Eintracht defenders seemed in no hurry to mark them.  We saw players give minimal effort to go track down loose balls, or pick up deflections, and if it wasn't for an amazing first-half effort from Kevin Trapp this game would have been 5-0 at the break.  Erik Durm was caught many times on the jog, in no man's land, while his mark was flying down the sideline.  He was caught too as he watched Leon Bailey's blast at the 8-minute mark that Trapp luckily recovered and got a foot on. Durm followed this lackluster effort by not even bothering to chase down the deflection, even though 30 yards closer to the ball than anyone else.  Evan N'Dicka didn't even try to step in front of either the pass or the shot. 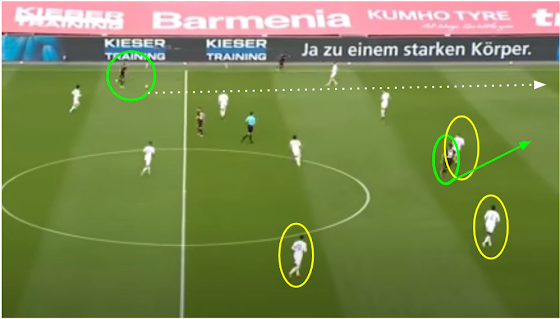 When Leverkusen finally broke through in the 70th minute, the flood gates opened.  Trapp could only 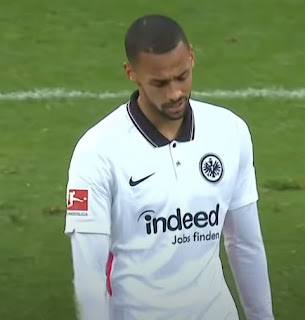 hold on for soo long.  Was Trapp unfortunate? Absolutely, if Bailey hits the ball square Trapp boots it away.  Could Trapp have anticipated it better?  Without Question.  Did everyone else just stand around and watch the ball go in the net.  Yup.  Kamada completely gave up on the play.  Ilsanker, we see you as well.  10 minutes later, after a decent Eintracht buildup, the effort was even worse.  It was a decent counterattack. Leon Bailey streaking down the left.  But when Lucas Alario flew behind the entire Eintracht defense, no one reacted.  Shoulders down, slight tamp of the foot, and the lads just looked defeated.  Djibril Sow was either too tired to get back, or just didn't care enough.  Ilsanker provided no pressure on the ball, and it looked like something from a training session. Minutes later, Trapp had to make another admirable stop as Nadiem Amiri took has time, sized up the situation, tested the wind, and blasted one from just outside the 18.  The little fight the team showed up with was all but gone at this point. Andre Silva tried to pull them back.  Steven Zuber made a nice play on the ball and found Silva's head for a sure fire goal, but it was too little too late.  Kerem Demirbay's blast that took an unfortunate deflection off of Tuta and into the net.  Silva mounted one more attack, but Zuber fired it wide.
What is most disappointing with this run, is that despite all the levels of disappointment that have stacked against them the last few weeks you had to believe that the players on the pitch were bigger than the off-field noise, better than a late-season collapse, and stronger than a coach who negotiated with an in-league rival during the heart of a Champions League run.  There's no way guys like Hinti, Trapp, Kostic, and Rode will let this team fall apart........right?  I understand they might feel abandoned by Adi Hutter, or even worse betrayed, but this team is bigger than that......isn't it?  The return of Martin Hintiregger would surely spark this team on an unprecedented run to the Champions League....wouldn't it?  The team that just bested Bayern, Wolfsburg, Dortmund, and annihilated Union Berlin would show its backbone and step up and win this game....it was just a one-week letdown against Gladbach.....right?

The defense isn't the only side of the ball that looks poor. Silva's miss right in front of the 6-yard box was one we've seen him hammer home with ease all year.  It shows a lack of focus. While the attack generated 10 shots from open play, it's difficult to say they were a threat.  Maybe it was inserting Amon Barkok into the starting lineup in place of Jovic or Younes, maybe it was Daichi Kamada's bonk of one in the opening minutes of the second half. Maybe it's the mounting pressure of an untested team trying to notch their way up. Maybe, it's exactly as it looks and the team just is just done.  Whatever it is, it's up to them to sort things out.  Unless the "lame ducks" aren't relegated to the office building at Mörfelder Landstraße 362.  Maybe there's some in the locker room as well. 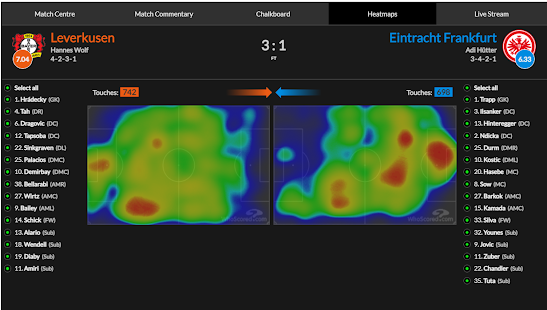 If it wasn't coming from Filip Kostic, it wasn't coming.  That's not a shock, Eintracht has relied heavily on Kostic for 3 years, but not to this extent.  With Durm trying to protect against Bailey's speed, he was providing almost nothing from the right flank.  There was no balance or push up the middle, and Barkok gave the ball away far too often. The Eagles didn't just look unready, they looked poorly organised.  They can't rely on a voice from their coach at the moment.  Whether Hutter has lost the locker room or not doesn't matter at this point, the locker room needs to keep itself together.  The only way this doesn't matter to the guys in that room is if they don't plan on being here to see the fruits of this labor.

Eintracht is no stranger to late-season collapses.  They saw a massive one at the end of the 2018/2019 season (pulling only 2 points from the final 6 games to fall from 4th to 7th). The year before they went 3-1-7 over the last 11 matchdays to fall from 4th to 8th.  But this year, this team is supposed to be of higher quality.  You could understand before, how lack of depth and a highly demanding style of play led them to fade down the stretch while playing in two or three competitions.  But this is a different group.  This team is more tested, this team has more depth, and this team doesn't have to deal with two competitions.  They have all they need to finish this run off, with our without a coach.  Now they just need to fight.