Eintracht 1:1 Mainz - Are we sure this isn't a Derby yet? 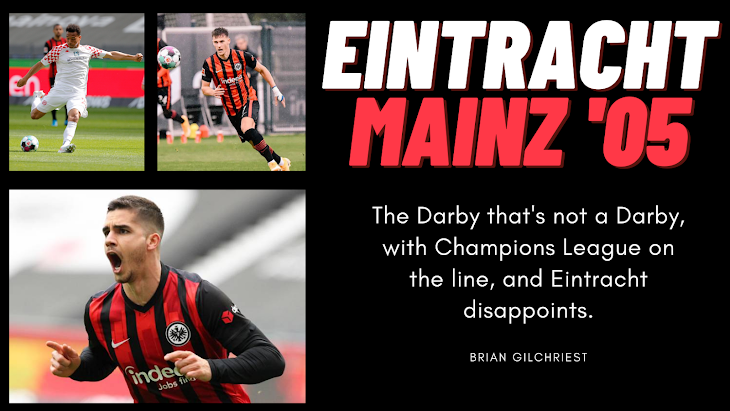 Eintracht vs. Mainz 05 isn't a derby.  We get it.  But.....can we at least call it a ....I don't know... friendly crosstown rivalry?  All-time between these two (38 Matches across all competitions) shows Eintracht with a narrow 15-10-13 record against the brothers from across the river.  Mainz has both broken our hearts late in the season the last two years (beating us on Matchday 30 in 2020, and Matchday 33 in 2019), and helped Eintracht secure a Europa League position by beating Hoffenheim on Matchday 36 in 2019.  Because of recent runs, and the importance of these games, late-season matchups against Der Karnevalsverein give me great amounts of gastric discomfort.  I don't really care what the proper decorum is in this situation anymore, I can't stand playing Mainz, and while I generally hope they do well enough to stay up and we need them to win out, I don't like them.  Respect to them, but no love.

I feel like a broken record at this point.......This team has lost its passion, confidence, swag, whatever you want to call it.  6 weeks ago the Eagles walked into any stadium with their heads high, chests out, believing they were one of the biggest and baddest clubs in the world.  Now they just look.....lost.  Gone is the energy, the high-paced combo attacks, and the break-necked pace that brought one of the more dangerous attacking sides in the Bundesliga.  It has been replaced with a style of play that looks lazy, boring, and uncaring.  I don't know where the Eagles have landed, but it's not in a good spot.  This game should have been 3 points.  Not just because we needed it, and not just because we have infinitely more talented players than the '05ers.  We simply waited too long and weren't clinical enough.  There are guys who are still fighting but not enough of them. There are guys still fighting, but not for an entire game.  Was it the worst game of the season?  Not by a long shot, but this game reflected just a lack of focus, intensity, and a killer instinct that we'd seen from the Eagles in Previous Stretches.  It seems like the wind is out of their sales at this point of the year.  This entire piece is all venting and frustration.  Eintracht dominated the game in every important attacking category, except one: Goals scored.  14 shots from open play, only 3 where on target, 8 were in the back of a defender's legs.  Eintracht had 1 really good chance, Kostic's blast off a cross in the 27th minute, but there was nothing in the first 30 minutes of play.
73% possession, 86% passing accuracy (compared to Mainz's 66%), 8 corners awarded (2 for Mainz), 637 passes completed (to 173), and one measly goal.  It took Ajden Hrustic's loft from his backside to luck us into a draw.  We were flat from the start, there was no spark, and we didn't start really going after Mainz until late in the game.  Credit to Mainz, they played hard, they defended hard, but the free-flowing attack that we saw for much of the season didn't begin to show up until minute 75. There were really good late opportunities, but we were unable to capitalize.   In a must-win game, we didn't treat it accordingly. 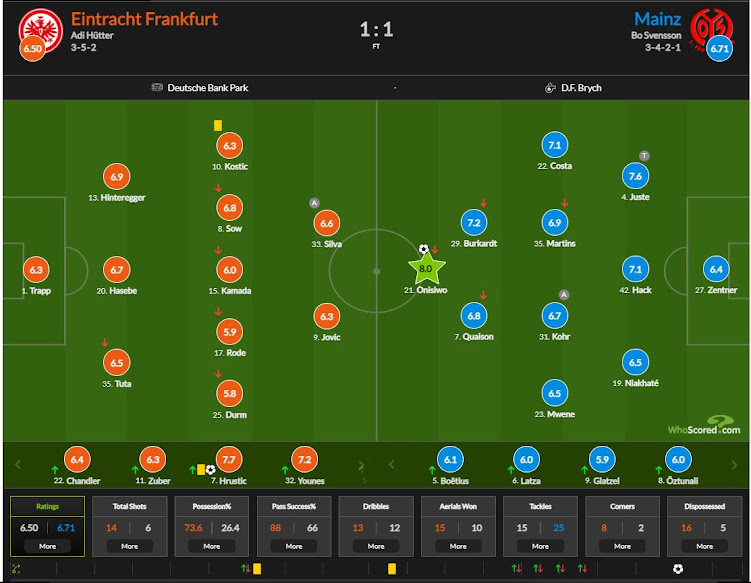 The opening 15 minutes of play set a bad tone:

Hütter opened the game using a two-striker front with Andre Silva and Luka Jovic.  Mainz has been on a terrific run of form during the 2021 Calendar year and has been extremely difficult for anyone to score on since the New Year began.  Mainz was able to execute a game plan that bogged Eintracht down in the final third.  Mainz came out in the opening minutes looking hyper-aggressive defensively.  The high press lead to an Erik Durm errant pass from deep in his own end.  Leandro Barreiro Martins won the ball, which found Robin Quaison who then hit a streaking Jonathan Burkardt who fired a left-footed rocket at Kevin Trapp from 12 yards out.  It wasn't the most dangerous of chances, but Mainz set a very aggressive and counterattacking tempo from the start.  Mainz then sat deep, with all 10 men inside their own half.   They held lines well, were super patient, and had to simply wait for Eintracht to give them the ball. Erik Durm (twice) and Djibril Sow both fired passes directly to white shirts, with no Eintracht players around them, and both Makato Hasebe and Filip Kostic both fired passes out of bounds all in the first 2:21 of play.  Rode fired a pass downfield to no one except the awaiting goalkeeper.  The first 5 minutes of play were awful. An Andre Silva offside was the biggest threat to a run Eintracht was able to create. Kevin Trapp had more back passes in his direction than Filip Kostic, Silva, Jovic, and Daichi Kamada had touches combined. The passing was off, there was no movement, and the attack just looked simply flat. When Karim Onisiwo hit the back of the net at the 10:46 mark, it was the end to a very frustrating opening spell for the Eagles.

Mainz '05's back line looked world-class (and they aren't) 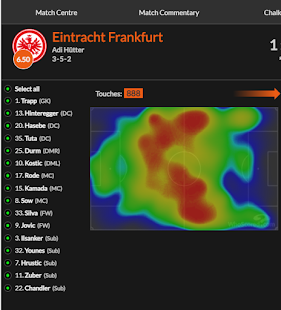 Check the stat line: 31 tackles, 27 interceptions, 28 clearances, only 16 fouls.  Jerry St. Juste looked like Rafael Verane and was chasing down everything with unbelievable pace.  He alone accounted for 17 pressures, 6 tackles, 7 interceptions, and 2 blocked shots.  He, Alexander Hack, and Moussa Niakhate formed a formidable wall that has been nearly impenetrable since Bo Svensson took the helm.  I don't mean to overlook the work these guys are doing, they just took down Bayern.  They are fast, quick, and well-disciplined.  But we just gave them the ball too many times.  Luka Jovic was dispossessed 8 times in the final third, and his 3 bad touches accounted for him having the ball taken away on 25% of his touches.  That's far too high a mark.  We had 28 possessions end with touches inside the 18-yard box, and it took a wonder goal from Ajden Hrustic to balance out the score. St Juste's chase down and tackle of  Silva inside the box at the 36-minute mark was a thing of beauty. What's overlooked there though is that all three of Mainz's backline had chased down Silva on the play.  Hack got Silva again after a tremendous cross from Kostic found Silva open from 20 yards out.   Silva took too many touches, and Hack knocked the ball away only 4 minutes later.

Flat out, Danny Da Costa was a much better player than Erik Durm in this game and has been for a few weeks.  It wasn't even close.  Over the last few weeks, there has been a gaping hole on the Eintracht right flank.  For all the credit I give Durm for being a solid and steady defensive presence, we haven't been the same since he returned from his injury.  He hasn't been the same.  He did basically nothing in this game that helped.  2 pressures, neither successful, 0 for 1 on tackles attempted, no blocks, one steal, one clearance.  He wasn't much of a threat offensively either, and in attack he direct line passed to white shirts multiple times, or to nobody several other times.  Da Costa on the other hand was 2 for 2 in tackles vs the dribble, 6 interceptions, 3 total tackles, and had a handful of dangerous crosses into the box.  He looked like the player that helped us get to the Europa League Semis a few years ago.

Dominik Kohr was better than Rhode or Kamada.   23 Pressures 4 tackles, and a tremendous pass to Onisiwo for the goal.  Kohr was a pest in the midfield the entire game.  Rode provided mostly nothing in his 28 minutes of play, and gave way to Hrustic who brought more of an attacking mindset.  Kamada didn't play well, missed extra passes several times, and was lazy to the ball at times.  I have been hoping both of these guys would come back for depth next year.  With the way they have played since going to Mainz that looks doubtful.

Eintracht dominated the last 15 minutes, but couldn't find the net.

We looked hesitant at times, a tad off at other times, but we were the more aggressive team by far.  The tide really started to turn when Armin Younes was subbed on in the 63rd minute.  Younes was perfect for this game, he was working well in tight spaces really penetrating spaces with his footwork.  He had a large part in the goal buildup, has he beat St. Juste off the flank and found Hrustic on the original shot.  Give Hütter credit for throwing attack-minded players of Younes, Timmy Chandler, and Hrustic all on the field at the same time, even if it was late.  Chandler found Younes at the back post for a great chance at the 70th minute, and the door began to open. Eintracht created 5 really good scoring opportunities over the last 5 minutes of play plus added time. 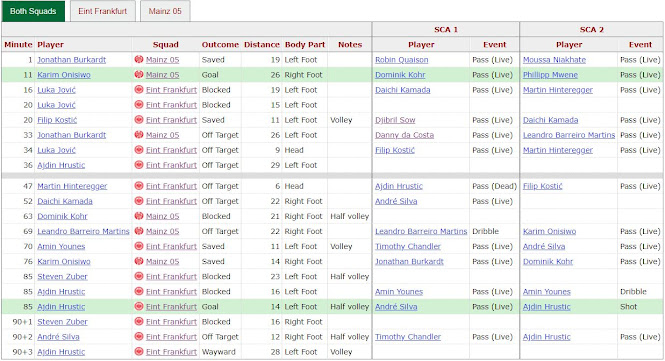 Starting with Trapp's extremely gutsy save on Onisiwo's breakaway, Eintracht completely took over.  Silva's chance in the 92nd minute barely missed both the goal and Hinti's foot at the back post.  The Eagles were not only were finding quality combinations and build-up (not just playing long balls for St. Jude to chase down) and moving without the ball.  Zuber had a super opportunity just moments before but waited too long on the ball and the defense was able to rotate over and get in the way.  Younes completely jump-started the attack, and if he's healthy enough to start next week he must start.  Timmy Chandler was a massive upgrade on the right flank.  The week after signing a new contract extension Timmy had an obvious difference in the threat on the right side and balanced Kostic out.  You really expected SGE to find that final goal and pull this one out.

There were also several missed calls down the stretch.  Timmy Chandler's foul inside the box off of Younes' cross was highly questionable.  Right after that, Jovic got called for a hook which also was iffy.  Both guys were fighting for positioning, and Jovic should have had the right to turn with the ball there.   Silva got taken down just outside the box

While this is a very tuff loss, and we were way too lackadaisical in attack for 70 minutes, there were signs of life over the last 20+4. The last twenty minutes of the game was better than we'd seen over the last four weeks, and that lineup might be something that Hütter considers over the last two weeks of play.  We need Mainz to pull us a solid, and we could really use them holding Dortmund to at least a draw on Saturday.  It's not over yet, but we still need a little help.
Thanks again for reading,
Forza SGE
Posted by Brian Gilchriest at 6:04 PM