I'm in love with a diva, and it hurts soo good. 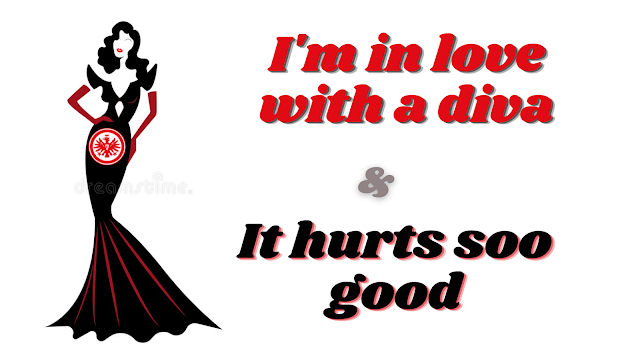 So, full disclaimer: I'm fairly new to these grounds.  I've been following Eintracht Frankfurt for just under a decade, so you'll have to excuse me.  Being from across the pond, we didn't have large exposure to the beauty and passion of European football until recently.  Across the Atlantic, we also have a completely different perspective on professional Sports. When I discovered S.G.E. I latched on hard.  It was love at first sight and an affair forged through trial. The fans seduced me more than the players or style of play. It was the supporters and their passion that drew me in.  They seduced me to this diva, and I have no regrets.
Hurt sooo go-ood.  COME ON BABY MAKE IT HURT SO GOOD.

When I first saw her, she was just the girl next door, but had that something:

17th in the Bundesliga table, with a coach and a bunch of players I'd never heard of, and games I couldn't watch.  I'd made a promise to follow this club, and I was determined to do so.  As the club began to take shape, and I began to learn more about 50+1, promotion/relegation, this club's values, and where it stands on social issues it just really struck a chord.  You could see they were slowly building something here, and this time was full of guys people had given up on.  They fought, they battled, they were grinders, and they began to play some really exciting soccer.  They had Timmy Chandler, Marco Fabian, and Carlos Salcedo.  Omar Mascarall was great, but Alex Meier got me.  The style was exciting, the fans and the TIFO were like nothing I'd ever seen. I found myself sitting at home getting chills down my spine listening to the fans scream "HEY EINTRACHT FRANKFURT!" and learning the words to "Schwarz-Weiss wie Schnee" and "Im Hartzen von Europa".   She sucked me in, and then she broke my heart :)

With Divas, there are highs and lows and constant drama.

It was supposed to be the year we finally broke through.  On matchday 27, we were holding firm to a Champions League spot and our Coach had us flying high and performing well.  We had just lost a hard-fought battle to Borussia Dortmund the week before and were facing a struggling Mainz team.  That's when the rumors about the diva started circling.  It seems that a bigger, richer, fancier club had come calling.  The club became instant turmoil, as the rumors gathered in strength.  "There's no way this is true, Bayern Munich can have anyone they want!" Another loss, a draw, and my Eagles dropped from 4th to 7th.  By the time the news officially dropped on April 13th, Champions League was a long-gone memory.  Admittedly, we were playing over our skis for the better part of 3 months. But the 4-1 loss to Leverkusen sealed our fate. Eintracht finished the season collecting 4 points out of a possible 21 down the stretch, and 7th was the final resting spot. We had one last chance to qualify for Europe, but it was definitely a long shot.

Niko and the guys had one more performance in them that year.  "There's no one in the goal!", and we found ourselves in Europa League.  Die Adler became Die Pokal Sieger, for at least a while. That's when the Diva..Diva'd.  You don't earn the Diva moniker without having serious amounts of talent, and sometimes the Diva has to show you who they really are.  R-E-S-P-E-C-T, find out what it means to me.  I understood why Niko was leaving, even if I didn't respect it.  I mean, it was Bayern Munich and probably a truckload of money.  The bad thing about Divas though is history often repeats itself.  And each time it does, it gets a little bit worse.

"Wait....Adi is leaving us for WHO?  No way."
"How is this news gonna break right before we play them......while we are fighting to seal a Champions League spot???"
"Bobic is going where??? He must REALLY want to leave, this isn't going away."

The thing about Divas is, everything is beautiful...until it isn't:

Beautiful voice, beautiful clothes, beautiful appearance. This club has beautiful fans, plays a style that is both beautiful and blue-collar, and has fans that make the whole thing pop.  That's what really got me.  Der Waldstadion explodes, but so does every single stadium Eintracht plays in.  The club has a message of togetherness and acceptance and aren't ashamed of it.  I love that, all of it.  They sucked me in with their grit and determination.  The fans enticed me with their passion and songs.   They seduced me with the wins over Bayern and Dortmund, and their exciting play.  Then they ripped my heart out...every single year.  Sure, we got a decent consolation this year.  We actually qualified for Europa on Bundesliga positioning for only the third time ever.  But.....CHAMPIONS LEAGUE.....ugh.  And the way it all went down at the end of the year just hurt. 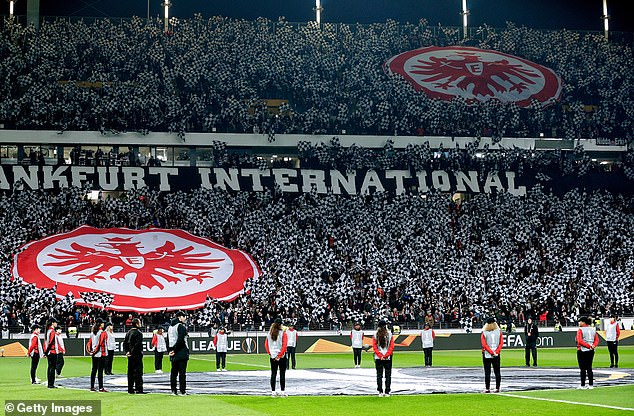 Divas will sell off all your favorite things when they're angry:

I kind of fear any of my favorite players breaking out, even though I'm desperate for them to.  You just get a feeling they'll leave you for someone else.  Someone bigger, flashier, makes more money, and drives a nicer car.  They might even have a bigger and fancier house, but they'll never have a better home. I understand why Jovic would want to go to Real Madrid, or why Niko Kovac left for Bayern, but I'll never understand why Adi Hutter did what he did this year.  Gladbach?  Is he even serious with this?  I'll never understand why Haller left us for West Ham, even if they paid him a ton of money.  Mostly because.....it's West Ham.  I'm not leaving my job teaching to scrape sewers, even if they tripled my salary.  Being there was soo great, he left during a champions league run and they took a 20 million dollar loss on him.  I don't even really understand Rebic leaving for A.C. Milan.  Sure they're a big and storied club.  We're a traditional club notching our way up. We have the greatest fans of any sport on the planet, and we've become a constant European qualifier of late.  Rebic left for a club that rejected an offer to play in Europe because they were financially strapped.  In the blink of an eye, the Buffalo Herd were all gone.  You could make a good case that all three worsened their situation, but were chasing something bigger.  Kevin Trapp went down that road, only to find his way back.  Sebastien Rode too.

Not only do your players get sold, but they sometimes just leave:  Lukas Hradecky, Kevin Prinz-Boateng just......left.  Bruda, slag den ball lang packed his suitcase and left for Italy.  Hradecky took his beer-drinking, fun-loving, Pokal winning attitude with him to Leverkusen.  I understand, players come and players go, but the way some of these left just.....hurt.

In a vacuum, this season should be seen as a success.  European qualification based on final standing has only happened 3 times in the last 25 years.  This is the highest final position in the table that Eintracht has seen since I started following them.  Andre Silva tied the club record for goals and transformed from a decent striker to a dominant force.  Djibril Sow took the leap to solid Bundesliga player and Amin Younes completely changed the squad and style of play on the pitch.  In a span of These are all things we should be celebrating.  But, it's really hard to see all the good with the way the season ended.
I'm not shocked that Fredi Bobic and Adi Hutter are leaving Eintracht; I'm shocked at how.  Bobic was outspoken when Kovac was announced midseason to Bayern a few years back, but I guess it's different if the Sporting Director does it in the middle of the season?  After the work that Eintracht put in during the Europa League run his first year here I really had a lot of respect for Adi Hutter, but the way he announced his departure I lost all of it.  Is it all he and Bobic's fault?  No, the players didn't perform.  But, it also felt like they were underprepared and lackadaisical.  The movement in attack suddenly stopped, and instead of the fluid, free-flowing attack going forward, Eintracht had to chug and churn for every inch they got.  The defending became more and more sloppy, and players weren't tracking back as hard or pressing as high.  The desperation suddenly left the club.  They looked like married couples "just staying together for the kids." The daily routine was there, but the fire and passion we had seen for most of the year weren't. As much good as happened this season, the ending was severely disappointing.  We thought it was a masterpiece, it turned out to be "Game of Thrones."  This is also part of loving a diva, this is part of loving Eintracht. Bring on the Kroshke/Glasner era, and lets finish what we started.
Thanks again for reading,
Forza S.G.E.
Brian
Posted by Brian Gilchriest at 10:10 AM