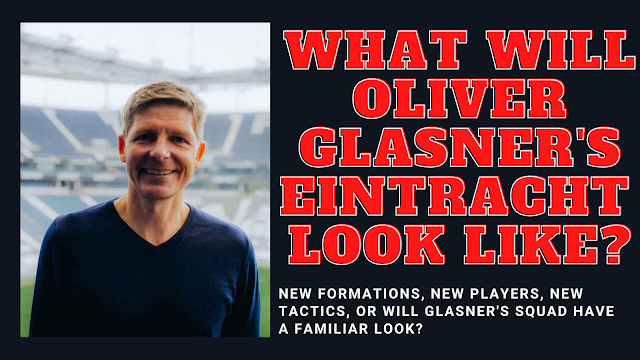 As rumors swirl about Filip Kostic (and others) possibly leaving this summer to the usual suspects of Italy and England, I've been trying to get my head around how Glasner will lineup in the 2021/2022 Bundesliga Season.  While (if you read the tabloids) it seems that there could be an S.G.E. garage sale going on this summer, it's also highly likely we see the full squad return.  While I'm excited about the new season, new coach, (hopefully) a fresh mindset, and fresh results, I'm most anxious about the possible mass exodus that could take place this summer. With the high unlikelihood that (outside of the moves already made) Eintracht will have the funds to bring in impact players at certain positions this transfer window, I'm assuming the squad will look very similar next year.

What can we learn about Glasner from his time at Wolfsburg?

There were sort of two different Oliver Glasner's over the last two years.  In 2019/2020, he was extremely flexible with his formations and lineup. Showing 4-2-3-1, 4-3-3, and 3-4-3 depending on matchups and style of play he wanted, Glasner seemed to try to weekly change his formations based on their opponent.  During 2020/2021 Glasner almost seemed like an entirely different coach, sticking primarily with a very defensive 4-2-3-1 that held strong in defense and ranked second best in the Bundesliga with 37 goals against.  While his defensive tactics are more compact and stringent than what we saw under Hutter, his attacking play is quite similar.  Glasner likes to play long and direct.  His teams typically aren't high possession sides with tons of short passing.  The passing numbers were very similar to Eintracht's last year under Hutter. Not an overly high overall percentage (Wolfsburg - 77.3 v. SGE - 78.2), both ranked in the middle of the pack in terms of total number of passes attempted ( Eintracht -6th with 18,416 vs. Wolfsburg - 9th with 17,140), where the two differed greatly was in the percentage of passes that were 30 yards or longer (Wolfsburg - 4th most, Eintracht 11th). Glasner loves to strike quickly on the counter-attack with long passing and quick transitions. As with most Bundesliga teams, Glasner loves high pressure, and his style fits well with what Eintracht has done under both Hutter and Kovac. The Eagles and Glasner should be a good match from a tactical standpoint, but how he lines up on matchdays might take a bit of creativity.  While he has the players to replicate his style of play, there are a few spots where the current roster might pose challenges for him.

As Adi Hutter found out, this roster might not fit his preferred formation: 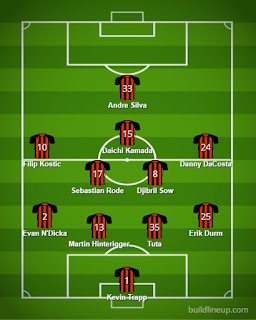 Last year Wolfsburg lined up almost exclusively (29 times in 34 matchdays) in a 4-2-3-1 during Bundesliga play.  They held that shape whether in attack or defense.  The keys to holding this shape in defense were two things (1) Yannick Gerhardt, who played the #10 but is a tremendous defensive player.  Yannick attacks ball carriers and can cover a good amount of ground both vertically and laterally. (2) The passing and deep shooting ability of Maximilian Arnold and Xavier Schlager.  Both of these midfielders have huge legs that can burn you multiple ways from deep. Sebastien Rode and Djibril Sow are different players but still fit into this style of play.  The main questions about trying to bring this formation to Eintracht would be (1) Daichi Kamada and Amin Younes aren't the defenders Yannick Gerhardt is. (2) Who plays on the right side?  Between Almamy Toure, Erik Durm, Danny Da Costa, Timmy Chandler and Amin Barkok, we have to find a combination that works going forward on the right.  This was the biggest weakness of Die Adler in their Europa League run (other than the total late-season collapse of their defense).  Erik Durm (for much of the season) brought defensive stability to the right flank but offered little going forward. Almamy Toure was fantastic defensive in the Matchday 22 win over Bayern (2:1) before going down to a hip injury that derailed his season. While he is vastly more athletic than Durm, Toure also lacks the touch and crossing ability going forward.  Despite the log-jam of players at this position, it's hard to see a combination of any two that would be impactful on the right flank. Glasner loves to have his wing players cut back inside and wreak havoc as opposed to staying wide and lobbing in crosses, and while I actually think this system is perfect for Filip Kostic (and will also reduce his overall workload), I don't see a compliment on the opposite side.  A Toure/Durm combination at the right-back based on matchups is likely, but this would also involve moving N'Dicka out of a natural position and into a left-back role. N'Dicka has played there under Hutter with varying results.  His long strides can make it difficult to cover the super quick forwards of the Bundesliga, and as long as he is playing in Frankfurt, needs to be on the field. 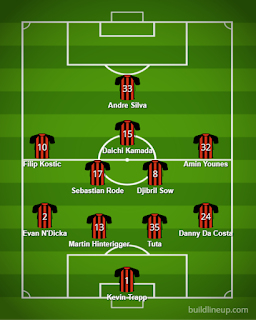 The other option of course would be to simply move Amin Younes outside.  While Younes isn't the high pressing, multi-faceted winger of Ridle Baku, he's fantastic at cutting back inside and creating.  Having a player behind him such as Da Costa that can overlap, but also support him in defense would be key.  Having Younes here (in my opinion) would demand a high work rate, extremely athletic defender behind him.  If Da Costa can be the 2018/2019 Da Costa, or the Da Costa we saw at Mainz last year he would be a  terrific fit.  Barkok could also be a very realistic option at the #10.  While he doesn't have the creativity or nack for simply making a play that Kamada does, he's a much better option defensively.  I actually think we could see Barkok take a big step this year, much like Sow did last year.

What we most likely will see, a very familiar look: 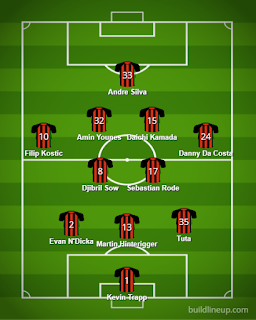 I believe that with the designs of the current roster, it's very difficult to shift away from the three-man backline.  N'Dicka is super talented but is much better suited as the outside man in a three-man backline than has a pressing and overlapping fullback.  The other problem is that our best two center backs are both left-footed.  When your best option is bypassing the midfielders to play deep balls to Filip Kostic, this isn't a bad problem to have from the guy in the middle, but putting Hinti on the right side would take away his big left foot and quality downfield passing.
While the Doppel Tzehn was all the rage last year during Frankfurt's hot midseason run, it was hardly the first time the Bundesliga has seen it.  14 times in the 2019/2020 campaign Oliver Glasner lined the Wolves up this way and used the 3-4-3 in 67% of their Europa League games.  While I think there will be several different formations and lineups that Eintracht uses this year for both rotational and tactical reasons, this will be the one most utilized.  The squad is best constructed for it, they've had success with it, and Glasner isn't foreign to it's usefulness.  While the question of Right Wing-Back may be unanswered all season long, I really think Danny Da Costa will emerge as the favorite.  The work he did at Mainz after his loan there can't be overlooked, and hopefully, he can hold form.

Thanks again for reading,
#Forza S.G.E.
Brian
Posted by Brian Gilchriest at 3:14 PM